1919 GCS 750cc JAP v-twin
Frame #2595
Engine #2CXIV22465
Gearbox #174D
George Cyril Stillwell began making motorcycles with his father Walter in September 1912, at 392 Post Office Place in Melbourne, Austalia, as George Stilwell & Co, although within a year he’d moved to bigger premises at 378 Liondale St, where he built his highly esteemed ‘GCS’.  Like many English and Australian builders of the day, he purchased his frame lugs from the Chater Lea Co. in England, and his engines from JAP, Precision, MAG (Motosacoche), Reading Standard, and Blumfield motors.  His first machines were direct belt drive V-twins, which gained a reputation as among the best Australian-built motorcycles – a bit more expensive than the rest, but still a good seller.
In 1916 Walter Stilwell retired, while well-known racer Leslie Parry became a partner in the firm, and the company became Stillwell & Parry Ltd, and the firm began purchasing frames from Australian builder A.G. Healing & Co.  By 1918, Stilwell & Parry began an agency importing English motorcycles, and increasingly, their machines were fully assembled by A.G. Healing.   At this time (the end of WW1), ‘loose’ engines by JAP, and Sturmey-Archer gearboxes, were difficult to obtain, and GCS began to use Swiss Motosacoche (MAG) engines, specifically the 750cc inlet-over-exhaust (‘F-head’) v-twin.  The MAG engine was typically Swiss, being beautifully built and expensive, if not quite as fast as the JAPs it replaced.
This GCS was built in 1919, using A.G Healing frame #2595, an MAG Type 2CXIV engine (#22465, built in 1916), but a Burman 2-speed heavyweight gearbox (#174D) and clutch are used, with a belt final drive, and Druid forks.  The aluminum footboards (cast with ‘GCS’) were typical of ‘colonial’ motorcycles, which needed to be robust to cope with the poor roads of the day.  Apparently, this 1919 GCS is the sole surviving example from that year, and was sold from the estate of Australian collector Ron Lofts in 1980. 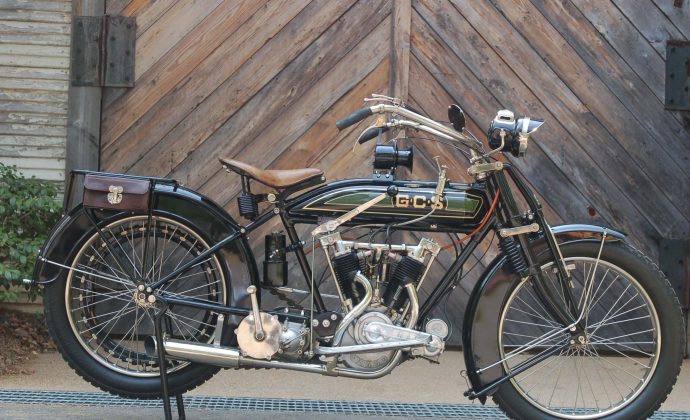 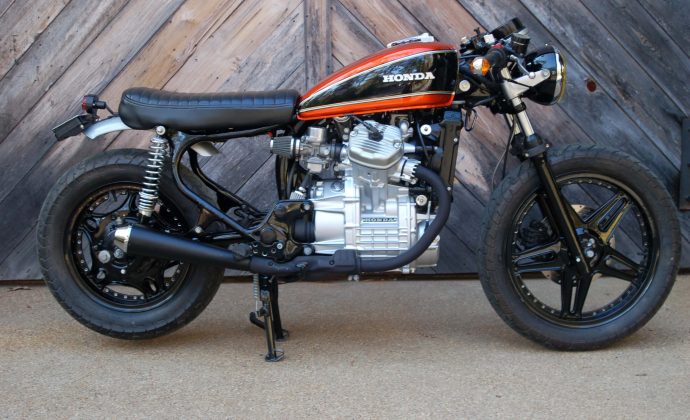