The Osborn Engineering Co, or OEC, was founded by Frederick Osborn in Hampshire, England, in 1901, making motorcycles with Minerva and MMC engines.  Father Osborne discontinued building bikes during WW1, but his son John resumed the family business in 1920, using Blackburne engines initially, and at first these new machines were known as OEC-Blackburnes.  Company engineer Fred Wood seems to be the source of OEC’s unorthodox chassis ideas for which they became best known, which includes a swingarm rear suspension with long vertical plunger-type springs housed in the frame tubing, which appeared in 1929.
Two years prior, Wood and OEC introduced the ‘Duplex’ steering system (not really ‘forks’), a visually complicated assembly of parallel tubes, visible on this 1936 machine.  The extended front tubes make for an extremely stiff frame, and very stable steering…almost too stable in fact, as the Duplex system could never be credited with being nimble.    At speed, the Duplex prefers to self-straighten, meaning it’s incredibly stable, if not particularly agile for corner-carving.  In an era of head-shaking and tank-splapping front ends, stability was a coveted chassis quality for riders, and most epecially to speed merchants.
The Duplex frame was really put to the test in 1930, when an OEC chassis was used by Claude Temple as the basis of a World Speed Record machine, using a supercharged JAP V-twin for power.  OEC had taken speed records in the past using ‘normal’ chassis, but the Duplex Temple-OEC-JAP proved perfect for the increasing top speeds of supercharged engines, and rider Joe Wright took the absolute speed record at Arpajon, France, at 137.23mph.
By that year (1930), every OEC had Duplex steering, and by 1931 they all had that curious plunger/swingarm rear suspension too, which not everyone felt was an improvement over a standard chassis.  OEC gained the nickname ‘odd engineering contraptions’, but the truth of the matter was both front and rear suspension systems worked, in an era of rigid rear ends and wobbly steering heads.
For 1935 and ’36, the OEC range included single-cylinder JAP engine machines of 250, 350, and 500cc, plus a model using the Matchless ‘Silver Hawk’ V4 engine, and a 982cc JAP sidevalve V-twin.  The 500cc model with the OHV JAP pushrod engine came only in a ‘DeLuxe’ version, with a four-speed Albion gearbox and full electric lighting (via BTH mag-dyno), and full suspension front and rear.   The DeLuxe was a full-suspension motorcycle of very high specification, a fast luxury machine from a distinctive British manufacturer with a proud history of World Speed Records under its belt. 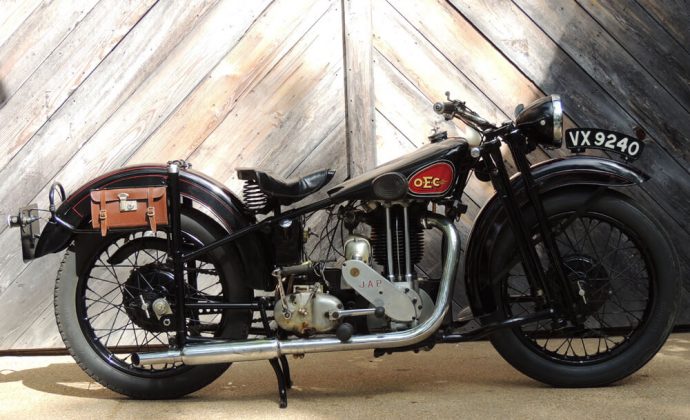 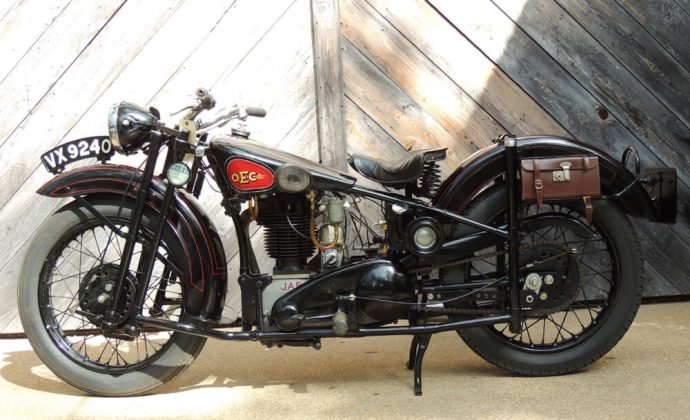