Panther motorcycles are easily recognized by their sloping engine with no frame beneath, and many stories surround them as ‘sidecar bikes’ or firing ‘at every lamp-post’ due to their long-stroke engine.  The real story is, as usual, far more interesting; that sloping engine, used as a stressed chassis member, was patented by Joah Phelon and his nephew Harry Rayner back in 1901, as a new type of motorcycle chassis.  Phelon licensed his design to Humber after building a prototype that year, and by 1908, Phelon and a new partner, engineer Richard Moore, began producing P&M ‘slopers’ themselves.  Their basic chassis design would carry on through the very last Panther Model 120 in 1966; the design was intended for easy engine access and a simple, light chassis, which gave the side benefit of a distinctive look. In 1922, P&M launched a sports version of their OHV roadster, called the Panther, and the name stuck, especially after good placings and wins in various TTs and GPs of the mid-20s.
While racing wasn’t the focus of Panther in the 1930s, their machines always had sporting performance, and enough solid torque to easily pull a sidecar as well.  The Model 100 was Panther’s largest pre-War model, with a 600cc OHV engine, and easy 85mph performance, with up to 100mph if an easy throttle hand was used.   This 1937 Panther Model 100, engine #M8142, represents the acme of their pre-War development, in performance and finish. It’s in lovely condition, and loaded with period extras, like a spotlamp, leather saddlebags, and an additional luggage rack, and is ready for a good long tour. 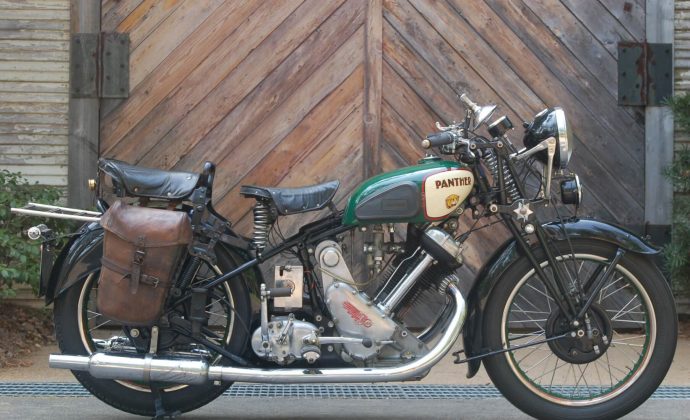