It’s little known outside France that Peugeot is world’s oldest motorcycle manufacturer, and still produces powered two-wheelers by the tens of thousands, although they fall into the sub-category of scooter and moped these days.  Still, in their early years (from 1998 onwards), Peugeot was THE motorcycle, or engine, to use in your competition machine, and the first Isle of Man TT in 1907 was won by –yes- a Norton, but using a Peugeot v-twin motor.  They followed this up by building the world’s first DOHC, four-valve racer, a parallel-twin engineering marvel, back in 1914.  It was a micro version of their GP racer automobile, which capped it all by using desmodromic valve action to boot.
WW1 did tremendous damage to the French economy, and seemingly their technical aspirations too, and their motorcycle industry turned away from technical world-beaters, to making gorgeously stylish sports-touring machines in full Art Deco style.  This 1938 Peugeot 515, frame #2799, engine #2799, is a perfect example, with an up-to-date 500cc unit-construction motor and excellent chassis and brakes, clad in fashionably flowing lines and rich color accented with chrome.  The French invented the Concours d’Elegance, and while this Peugeot wasn’t designed for that purpose, it’s a natural show bike, so it’s no surprise it was honored with a prize at the 2013 Pebble Beach Concours. 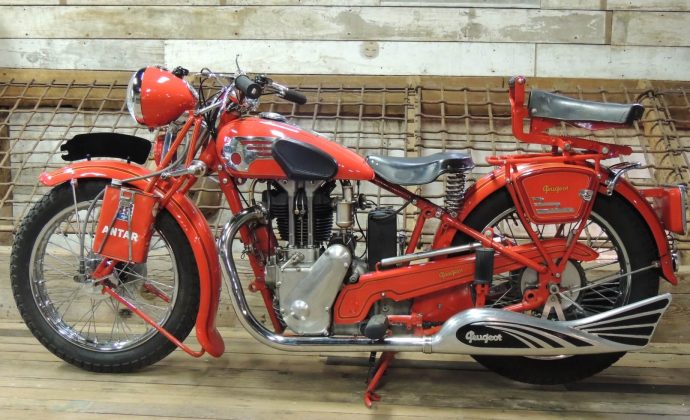 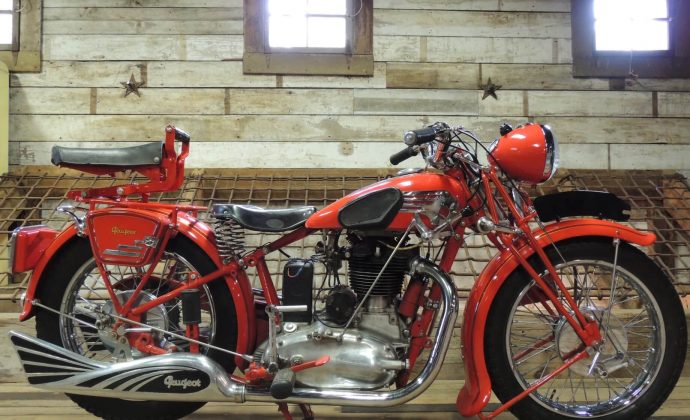