Giuseppe Gilera began production of his own-design motorcycles, a 317cc OHV single, back in 1909, after apprenticing at Bianchi and Moto Reve.  His small factory produced a range of single and v-twins, and from the start were deeply involved in competition, winning long-distance road races, as well as the 1930 and ’31 ISDTs, with their well-designed and fast machines.  Everything changed in 1936, when aircraft builder Caproni acquired CNA, another small aircraft company, which also dabbled with an experimental across-the-frame DOHC four-cylinder racer, the Rondine.  Caproni had no interest in bikes, and offered the Rondine racing program for sale, which Gilera wisely bought.  They might as well have purchased the space program, as the Rondine had been in development as a 4-cylinder racer since 1923, at first pushrod, then OHC, and finally DOHC, water-cooled, and supercharged.  The Rondine was the most advanced motorcycle in the world, and truly laid the foundation for all future across-the-frame 4-cylinder motorcycles.  It was also wickedly fast, producing 86hp in 1934, and taking the World Speed Record in 1937, on the Autostrada just outside Brescia.
For a relatively small company, such exciting technical development attracted talent, and engineer Giuseppe Salmaggi arrived at Gilera after a stint at Saroléa, immediately designing a truly advanced single-cylinder workhorse.  Dubbed the Saturno, the new machine debuted in 1939, and included a unit-construction 500cc OHV motor in a fully-sprung frame, with large 8” aluminum brakes, and plenty of potential for development and tuning.  WW2 meant production was stalled until 1946, but the Saturno was still modern, and good for 85mph in Sport form, where it served as the ‘Italian Gold Star’, meaning it was used for everything from road racing to trials riding, and continually developed through 1960, a remarkable run for a basically unchanged design (barring chassis updates) from 1938.  Saturnos are highly sought-after today for their modern performance and beautiful aluminum engine castings, plus of course their long history as successful competition machines.
This first-generation 1939 Gilera Saturno, engine # 269054 is in very good restored condition, with mild performance upgrades, such as a modern Dell’orto carburetor. 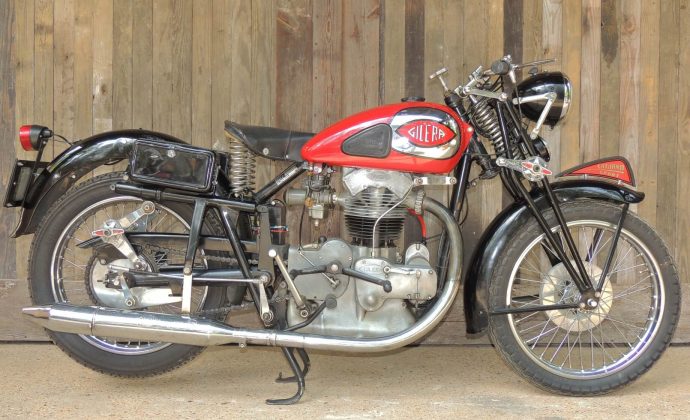 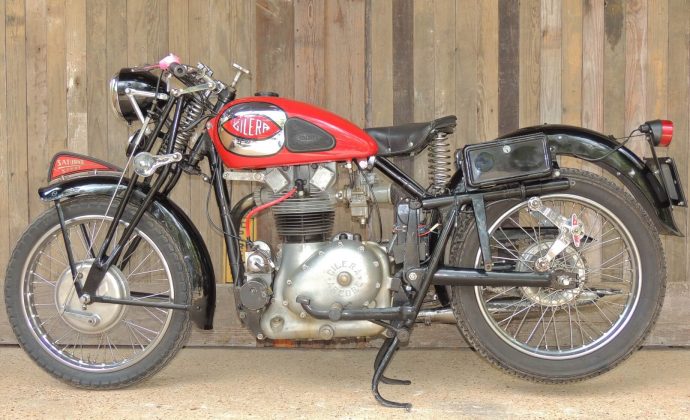