While the postwar Vincent-HRD built a reputation as a red-hot sports machine, taking speed records and excelling in races like the Isle of Man Clubman TT, not all prospective buyers were race-ready.  The loping gait of a big v-twin has always been a natural touring machine, and while the Vincent engine can be made to fly, in standard form it makes an excellent and comfortable road bike, with lots of power at low rpms, just the sort of engine characteristics you’d want for relaxed cruising.  Recognizing that American riders were especially fond of protective fenders and smaller-diameter, wider-section wheels on their road bikes (ie, more like what Harley and Indian offered), the Vincent factory responded by building the ‘Touring’ version of their Rapide model, with 19” wheels, valanced fenders, and cowhorn handlebars.   107 of these Touring Rapides were painted ‘Chinese Red’, a stunning color scheme, and among the rarest and most sought-after of all the postwar Vincents.
This 1952 Vincent Touring Rapide is one of perhaps 12 built with a black chassis, and rarest of all, it still wears its original paint; a combination likely unique in the world.  It was originally dispatched to San Francisco (the Indian Sales Corp) on Jan 8th 1952, and sold in Fresno CA.  It shows less than 10,000 miles on the clock, and the condition of the machine overall supports this mileage as accurate.  It deviates from standard in having the large Black Shadow speedometer and a bit of extra chrome on the Girdraulic spring tubes and chainguard.  The condition of this Rapide is extraordinary, and a veritable University to Vincent enthusiasts interested in ‘how it was’ rather than ‘how it was restored’.  There’s only one like it, and as original-condition machines are increasingly the gold standard for collectors, there can be few Vincents as desirable as this. 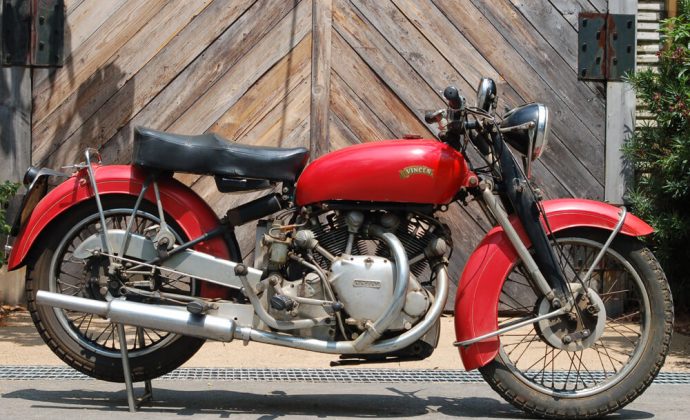