F10AB/5B/EV632
Vincent-HRD motorcycles built a reputation from the late 1930s onwards as the fastest production motorcycles in the world, and carried on breaking records and building reputations long after their motorcycles stopped production in 1955.  That magnificent engine was housed in a chassis designed in the dark hours of WW2, which was radical for the era, using the engine as an in integral part of the frame with forks, wheels, and tanks bolted around it.  The introduction of the Norton Featherbed frame in 1950 made the Vincent chassis an instant antique, and some racers responded by installing a Shadow or Rapide engine in a Norton frame, which extended the competitive life of an engine which was still the most powerful available, even into the mid-1970s.
The clever Swiss engineer and racer Fritz Egli had an idea for a radical new chassis, and in 1967 built a large diameter backbone frame which doubled as an oil tank, which could hold a Vincent, or just about any other engine.  The frame was light and strong; combined with a good set for forks and rear shocks, plus with up-to-date brakes, meant the Egli-Vincent was a motorcycle with thoroughly modern performance, decades after the engine was originally built.  In 1968, Egli’s new machine won a European hillclimb championship, and demand for his frame meant he started small-scale production, which later included tuned Japanese engines in his radical chassis and bodywork.  Of course, not all Eglis were built for racing, and plenty of café racers and even tourers were built to update the well-loved Vincent mystique.
This 1968 Egli-Vincent is built to sports-touring specification, using Ceriani road race forks, a double-sided 4 leading shoe front brake, alloy rims, and a full touring package of a comfortable Vincent seat, muffler, and Craven fiberglass panniers and topbox.  It’s the ultimate Anglo-European touring rig from the era. 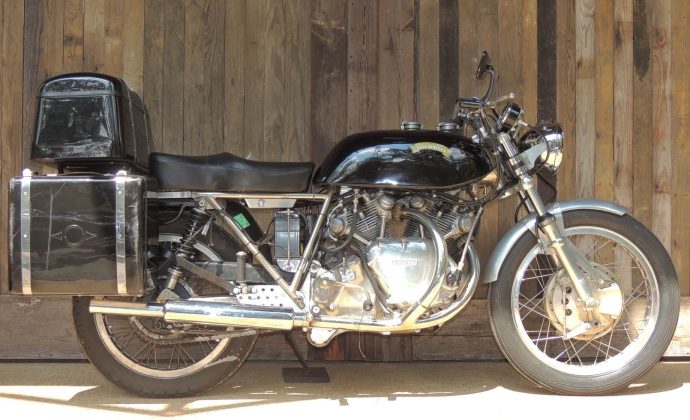 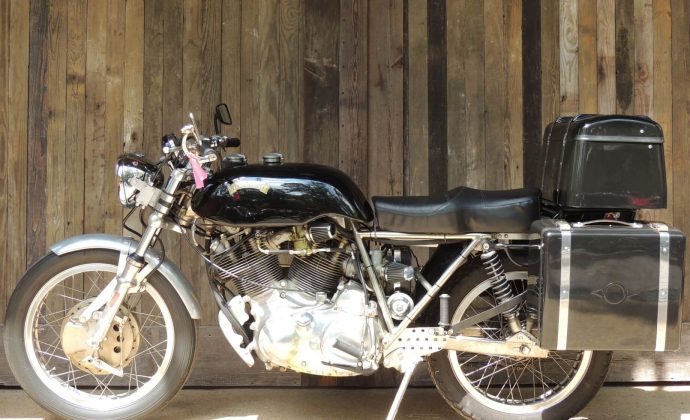