After 37 World Championship titles, MV Agusta motorcycles retain every bit of the magical aura they generated by dominating the racing scene in the 1950s, 60s, and early 70s.  Whether a humble single-cylinder two-stroke or a magnificent big-bore four-cylinder, as we have here, all glow with the promise of speed and success; they’re full of win, just by existing.  It doesn’t matter that MV borrowed their engine design from Gilera’s remarkable 4, or that MV’s competition mostly evaporated after 1957, when most other factories fled the expensive GP scene.  When competition did arrive from Japan, MV was the only European factory to successfully battle the newcomers in the premier capacity class, taking its last World Championship in the 500cc class in 1974, even taking 2nd place in the world title in 1975, by which time the factory was in deep financial trouble, and could no longer afford the R&D necessary to battle the buzzing two-stroke hordes.
The 850SS was the ultimate factory roadster MV Agusta, and the American-spec version of the 850 Monza; every one of 27 produced was hand-prepped by the race chief of MV Agusta, Arturo Magni, a mere 3 years after their last 500cc GP world title.  The 850SS was the fastest road machine in the world, and with special features like the ‘Magni’ race exhaust as fitted to this machine, was surely a 150mph motorcycle.  Every MV ‘4’ is a coveted collector’s machine, with the benefit of a remarkable survival rate, and the detriment that far too few of them are seen burning up the roads these days, with that exceptional deep howl from the exhaust, so very different from its Japanese competitors.  This 1977 MV Agusta 850SS is in exceptional condition, and includes the spoked-alloy EFM wheels and triple Brembo disc brakes.  It comes fully guaranteed to induce a salivary response in any conscious motorcyclist. 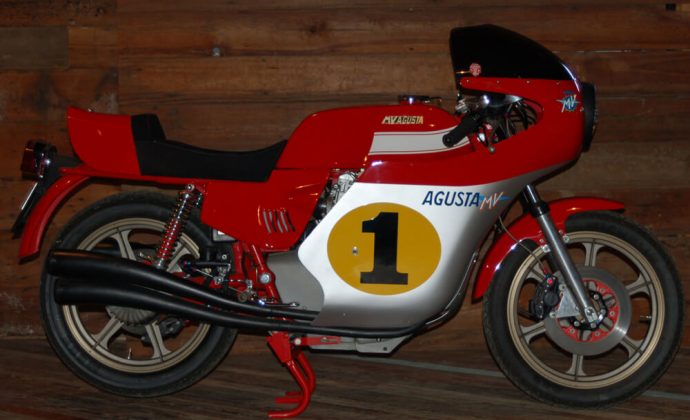