1936 FN M-91
Frame #5172
Engine #6854
Owned for 22 years by Pierre Lamount.
Fabrique National de Herstal was established in 1889 as an armaments manufacturer in Belgium, and began producing a shaft-drive bicycle in 1899, to which they attached an engine of their own make in 1900.  By 1901, they commenced to build their first proper motorcycle, a single-cylinder machine of  133cc with ‘atmospheric’ inlet valves, which year by year grew larger in capacity, although positive inlet valve actuation had to wait until 1909.  Before that, in 1907 FN developed a multi-ratio belt drive using multiple pulleys, and a 244cc engine.
In 1905, FN began selling the first four-cylinder production motorcycle in the world, using a small inline motor of 362cc with inlet-over-exhaust valves, designed by Paul Kelecom.  By 1908, the motor had grown to 498cc, and FN exported machines around the world, including the US.  The 4-cylinder machine weighed 165lbs dry, and would do 40mph.  An FN 4 was entered in the 1908 Isle of Man TT – the first 4-cylinder machine on the Island – and placed 3rd.
By 1924, all FNs switched to chain final drive, and the single-cylinder machines had a totally redesigned unit construction motor (‘en bloc’), all 348cc and 498cc with both sidevalve and OHV heads.  By 1930, the OHV versions of these machines were very sporting, and specially tuned models were entered at the Isle of Man TT, and used for speed records on the Arpajon straightaway and Montlhery speed bowl, with veteran Brooklands racers Wal Handley and Dougal Marchant on board.  Top speed for these machines was 192.7km/h (119.7mph) on the flying mile, a world record.  By the end of their 1930 session, FN held 33 world records.
The Model 91 was a solid and reliable sidevalve on FN’s typical unit-construction model, with their Art Deco logo (representing a bicycle pedal-crank) cast into the gear-driven primary drive.  With a 4-speed gearbox and 6” brakes front and rear, it gave solid performance, and is well respected in the European collector’s market, although almost unknown to Americans! 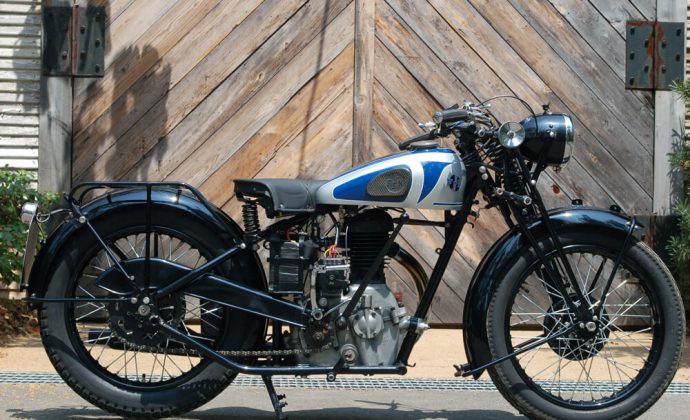